When the church gates at St Columba’s Church in Warcop started to deteriorate, the Church Warden and Parish Council had to start getting quotations for repairs or a new set of gates. The cost for new gates, which are at the top of the church’s ancient yew tree walk, soon came out a several hundred pounds.
It was at this point that the Army Camp and Landmarc came to the rescue. David Keetley, Chair of Warcop Parish Council, had recently attended the annual MOD liaison meeting along with several other local representatives. “At the end of the meeting, Major Lynch asked if there were any community projects that they could help with so I gave him a ring. From there, he sent Steve Legg and other staff to take the gates away and assess the damage.” It soon became clear that the gates were beyond repair but the Landmarc staff kindly offered to make a new set free of charge.
“We were flabbergasted at their generosity,” said Church Warden Shelia Morbey. “The joiners have made a fantastic job of the new gates and all of us in the church community are so grateful to the Army Camp and Landmarc for this wonderful gesture. They even rescued and cleaned up a brass plaque which we had almost forgotten existed!”
A group of representatives from Landmarc, St Columba’s congregation and the Chair of Warcop Parish Council, David Keetley, attended a brief ceremony to celebrate the fitting of the new gates and to express their thanks for this great example of the Army Camp working with the local community. 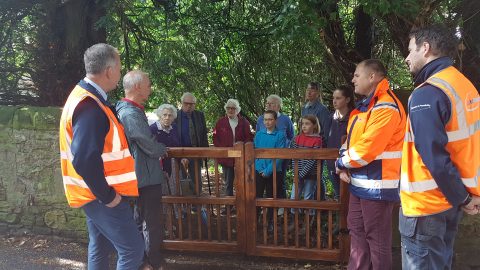 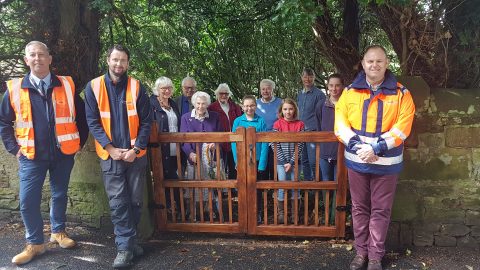 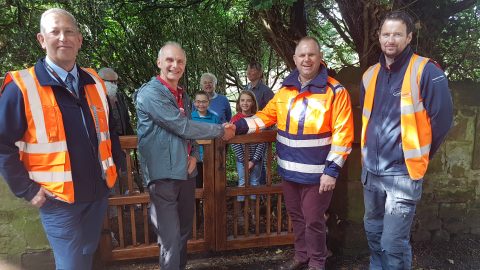