The government has now published its Preferred Route for the dualling of the A66 between Penrith and Scotch Corner.  The link to the website with the full brochure is below. You will notice that there are no changes to the Appleby-Brough section. However, a number of people have questioned the fact that we have only been offered one option and Highways England have been contacted asking them to re-consider a northerly route which goes across MOD land and also A.O.N.B. land. We believe that the published route is too close to Warcop and the junction into Warcop will include a 30′ high bridge and a slip road over the army playing field to achieve east and west access to the new road. This will increase noise and pollution levels. The Sandford junction is west only thus increasing traffic through Warcop for drivers wanting to go east.

Our proposals suggest a fully northern route behind all houses with east-west junctions at Sandford road end and at Brough. The old A66 road would be used to join the new dual-carriageway, and would avoid a big junction at Warcop and keep the army playing field intact. It can then be used for local traffic and cyclists. 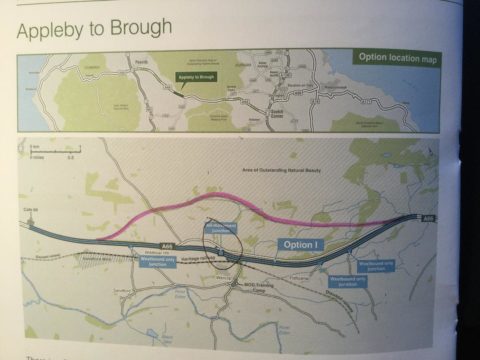 Here is an extract from Highways England:

The selection of the preferred route follows an exhaustive review of options over several years. We have taken into consideration ecological, environmental and historical features as well as our analysis of responses to the public consultation which took place between May and July 2019.

Our aim is to increase safety, reduce congestion and improve journey times by dualling the remaining single carriageway sections along the A66 between M6 junction 40 at Penrith and the A1(M) at Scotch Corner. Other improvements are also proposed along its length, such as at Kemplay Bank roundabout and the junctions with the M6 and A1(M).

You can find out more about our decision in the Preferred Route Announcement brochure, which is available from www.highwaysengland.co.uk/projects/a66-northern-trans-pennine along with our Options Consultation Report.

We will now develop the preferred route design ahead of a future public consultation. This will offer you and other interested parties more opportunities to provide your views on more detailed designs before we apply for a Development Consent Order which provides the necessary planning approvals to enable us to start construction on the project.

If you have views on this route or our suggested northern option, please contact Highways England on this email address: